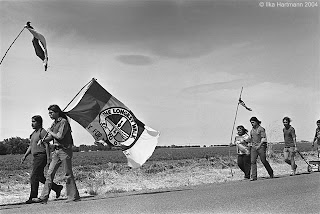 The Longest Walk 4: Return to Alcatraz is being initiated by those on the original, The Longest Walk in 1978. It will begin on July 15th, 2012 in Washington D.C. and travel to Alcatraz on December 22, 2012. The purpose of this Walk will be to reaffirm the heart of Traditional Tribal Sovereignty rooted in Ceremony and land based spiritual relationships. We call on all Indigenous Peoples to come and support this Walk.

We have gone to Washington D.C. many times to seek justice, the protection of treaty rights, and the continuing existence of our Peoples and Ways of Life. They have had their opportunity. The time has come to reclaim for ourselves the prayers that have gone east and bring them back full circle to Alcatraz, the symbol of the modern assertion of what has been called the Red Power Movement. We Walk to educate our own Peoples on what Tribal Sovereignty means from an Indigenous Peoples way of life. We Walk to affirm to the world that we still continue as free and sovereign Peoples as we define it. We Walk to remind those of our Peoples engaged in dealing with the nation-states that tribal sovereignty is not defined by non-Indigenous laws, rules and regulations; nor by economic development, good governance, and corporate structures. These elements may be pragmatic, but they do not define us. We Walk with the spirits of our ancestors for the present and for the future generations so that we as Peoples do not forget what makes us Indigenous.

We also Walk to remind all peoples that Leonard Peltier and his continuing incarceration is symbolic of the continuing incarceration of all Indigenous Peoples in the policies and political structures of the colonial nation-states. The time has come for the release of Leonard Peltier based on principles of reconciliation. It seems strange and one sided that nation-states seek forgiveness for horrendous crimes against our Peoples such as massacres, land confiscations, the theft of our children to abusive boarding schools and such, yet can’t find a way to release a person who has served over 30 years in prison, for what happened during a time of conflict. Leonard Peltier should be freed on this principle of reconciliation regardless of what one may think in terms of justice, innocence or guilt.

As this Walk is about the spiritual foundations ofour sovereignty as talked about in The Longest Walk Manifesto of 1978, we also ask for elders and spiritual leaders to come and lend support and advice where possible. To this end we are also going to have a Spiritual Gathering at Cahokia Mounds in September, 2012.

Organizers said further info will be forthcoming and those wanting to help out and that fundraising will need to be sanctioned by reps from the Working Group.
Posted by Brenda Norrell at 6:30 AM No comments: Links to this post 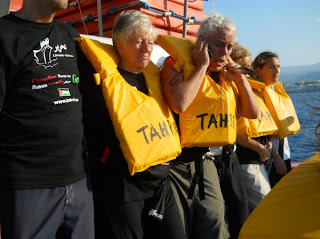 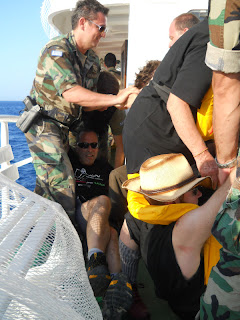 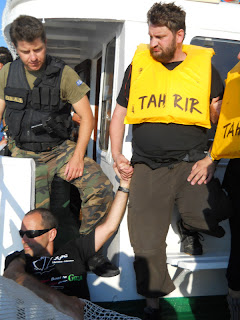 Twitter photos by Jesse Rosenfeld: Passengers on the Tahrir lock arms in nonviolent protection of the Tahrir as the Greek Military Coast Guard boards to takeover the boat.

Monday, 8 pm eastern time: "Canada Boat to Gaza Lack of electrical power prevents us from using sanitary facilities or refrigeration, and we are without lighting for security." There are reasons to believe the boat will be sabotaged in the port.

Canadians Make a Run for Gaza
By Brenda Norrell
Censored News
http://www.bsnorrell.blogspot.com
MONDAY, July 4, 2011
The Canadian Boat on the Freedom Flotilla II to Gaza, Tahrir, reports that the boat was rammed into a concrete pier by the Greek Military Coast Guard, after it made a break for international waters and Gaza. The boat was underway for 15 minutes, when overtaken. The boat began leaking fuel after it was rammed.
Two activists were handcuffed who were aboard kayaks, after trying to prevent the Coast Guard from blocking the Tahrir. The handcuffs were removed, but their arrest status is not known.
After the Coast Guard towed the Tahrir to port in Crete, the passengers remained onboard.
"We are all the captain," the delegation said on Twitter.
"All delegates except those detained are spending the night on the Tahrir. Some are sleeping, others keeping watch," the delegation said on Monday, July 4, at 7:30 pm eastern time.
"A number of local Greek people are spending the night on the dock next to our boat in a show of solidarity."
The activists are without electricity, but supporters have brought them pizza, the universal show of support. They may face arrest if they leave the boat. The Tahrir is carrying activists from Canada, Australia, Germany, Belgium and Denmark.
Meanwhile, more US passengers on the Audacity were Hope boat were arrested in Greece today, Monday, July 4. Yesterday, those fasting outside the US Embassy were cited and released. Those arrested today remain in custody:
Update from the US Boat Audacity of Hope:
Here's the latest news we have:
1) U.S. passengers harassed and arrested by Athens police
Nine of the passengers on the U.S. Boat to Gaza began a fast last night (7/3). They are Ken Mayers, Carol Murry, Medea Benjamin, Paki Wieland, Ray McGovern, Brad Taylor, Kit Kitteridge, Kathy Kelly and Linda Durham. After a rousing gathering in front of the U.S. Embassy (see photos and video on our website), they were all "cited" by the Athens police with occupying the sidewalk across the embassy and they were let go right away.
Today, 6 members of the U.S. Boat to Gaza were held at an Athens police station after Greek police arrested them for sitting on a park bench across from the residence of the U.S. Ambassador to Greece. Ray McGovern, Linda Durham, Debra Ellis, Ridgeley Fuller, Ken Mayers and Carol Murry were put into squad cars and taken to the police station. We are not sure of the status of these 6 people at the moment.
2) The captain of The Audacity of Hope - John Klusmire - is set to be at a hearing at 12 noon (Athens time) on Tuesday. There are 2 Greek lawyers serving as his defense council. It is important to keep the pressure on the U.S. State Department to make sure they in turn pressure the Greek government to release our captain. Below are numbers and email addresses you can use to contact them. Please keep the pressure on!
3) Status of some of the other boats in the flotilla
Shortly before 6 pm (Greek time) today the Canadian boat, named Tahrir, left its dock in Crete to set sail for Gaza. They got to within 4 miles of international waters when Greek Special Forces stopped them from going any further. The Greek military boarded the Canadian boat and there are reports that when they asked for the captain of the boat all 30 people on board answered, "I am the captain." The Greeks took command of the boat and at least report where headed back to be docked. We have heard reports that all of the people on the boat will be arrested, but we do not have confirmation of that.
Two boats from France - a cargo ship and a smaller passenger boat - are in international waters in the Mediterranean Sea. (They did not set sail from Greece.) We are not sure what they are planning on doing.
The Irish boat was sabotaged beyond repair last week and the Greek boat was also sabotaged but we do not have an update on their status.
Read more: http://bsnorrell.blogspot.com/2011/07/us-flotilla-passengers-arrested-fasting.html
Posted by Brenda Norrell at 7:10 PM No comments: Links to this post