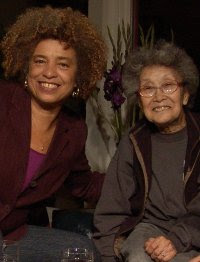 WHERE: ASU Tempe Campus – Neeb Hall (http://www.asu.edu/tour/tempe/neeb.html
SPONSORED BY: Local to Global Justice (http://www.localtoglobal.org/
and The School of Social Transformation (at ASU)
We will be collecting donations at the event for survivors of the Haiti Earthquake.
ABOUT THE MOVIE:
Features conversations that span 13 years between two formidable women whose lives and political work remain at the epicenter of the most important civil rights struggles in the US. Through the intimacy and depth of conversations, we learn about Davis, an internationally renowned scholar-activist and 88-year-old Kochiyama, a revered grassroots community activist and 2005 Nobel Peace Prize nominee's shared experiences as political prisoners and their profound passion for justice. On subjects ranging from the vital but largely erased role of women in social movements of the 20th century, community empowerment, to the prison industrial complex, war and the cultural arts, Davis' and Kochiyama's comments offer critical lessons for understanding our nation's most important social movements and tremendous hope for its youth and the future.

ABOUT THE FILM MAKERS:
H. L. T. Quan (Ph.D. University of California-Santa Barbara) is an Assistant Professor and an Affiliate Faculty in African/African American Studies, Asian Pacific American Studies and Women's and Gender Studies. Her research centers on race, gender and economic and political thought. She is currently writing a book about savage developmentalism and its tendentious propensity to secure order and capitalist expansion. This study investigates foreign policy conducts by Japan in military Brazil, the United States in occupied Iraq, and China in Sudan amidst humanitarian disasters. She is also working on a collaborative project on the historical and political development of Black capitalism in the United States, a 17-city comparison.

Professor Quan is also a co-founder and member of QUAD Productions, a not for profit production company that produces media for progressive community organizations and activists. She and C. A. Griffith (Associate Professor, School of Theatre & Film) are co-directors and co-producers of the "Mountains That Take Wing: Angela Davis & Yuri Kochiyama - A Conversation on Life, Struggles & Liberation" and "América's Home" (working title).