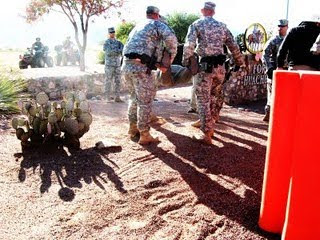 Joshua Harris, a California graduate student, is set to appear for arraignment at the U.S. District Court, 405 W. Congress Street, Tucson on Wednesday, February 3, to answer criminal charges following his arrest last November 15 during a protest of military involvement in torture and robotic warfare. He is on the docket for an 8:30 a.m. arraignment, along with other unrelated arraignments scheduled that day.

Harris, 33, is charged under Arizona law with trespass onto the U.S. Army's Fort Huachuca in Sierra Vista, Arizona, and with refusing to provide a truthful name. His prosecution is proceeding in federal court in Tucson under the Assimilative Crimes Act (18 USC 13).

Harris is the only one among five people arrested during the November demonstration to be prosecuted. Four others were released within the hour after identifying themselves to military police and receiving a formal letter barring them from entering the base for one year. Harris was released later that day, having identified himself after being cited for the offenses. He initially said he was there representing a victim of torture, and had only given that man's name.

Following is the statement explaining why the five were among 150 people protesting at Ft. Huachuca. More information about the November demonstration can be found at http://tortureontrial.org/media.html

We return to Fort Huachuca to call for an end to torture.

We are here because we desire dialogue with soldiers and commanders engaged in interrogation training.

We are here because we still question whether soldiers are provided with adequate training about international human rights law so they would know to refuse illegal orders and other pressure to torture captives (including a guarantee that speaking out would not lead to retaliation or punishment).

We are here in the hope that healing can take place - healing for the victims of torture, as well as the men and women who have been involved in carrying out torture.


Because the Obama administration has failed to close Guantanamo and the U.S. continues to imprison and interrogate thousands of captives at military prisons in Afghanistan, Iraq and places unknown, we renew our call for civilian, human-rights centered oversight of all interrogation training and practice.

Ft. Huachuca is also implicated in the rapidly expanding, legally questionable and morally reprehensible use of remotely-piloted aircraft, or drones, as a weapon of war. We're told that currently the Army only trains for the operation and maintenance of reconnaissance and surveillance drones at Ft. Huachuca. But we also know that the Army plans to weaponize some of these same drones.

Drone attacks have killed many more innocent civilians in Iraq, Afghanistan, Pakistan and elsewhere, than alleged terrorists. The U.N. Special Rapporteur on Extrajudicial Executions has asked whether the use of drones in targeting terrorists to be killed constitutes "arbitrary extrajudicial executions", or rogue assassinations in violation of international law.
We are here today to call for an end to the use of armed drones in warfare. We believe this terrorizing and killing generates deep resentment in the region that incites hatred for the U.S., boosts recruitment for Taliban, Al Qaeda and other terrorist groups, and may spawn decades of retaliation.

We act in solidarity with the campaign to close the School of the Americas/Western Hemispheric Institute for Security Cooperation at Ft. Benning, Georgia, where the testimony of torture survivors has informed our outrage and moved us to action. We also act in solidarity with people in New York protesting the presence of Reaper drones at a NY Air National Guard base outside of Syracuse today.

Rogue assassinations and torture have damaged the soul of our nation and tarnished our image around the world. We know that a world without torture, without violence and without war is possible. We invite you to help us create that world.