Arizona Racism: Creation in a Time of Resistance 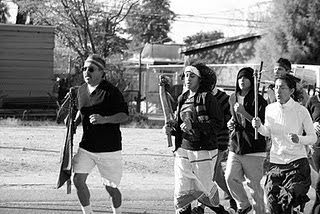 Creation in a Time of Resistance
By Roberto Dr. Cintli Rodriguez
photo by L.M. Hernandez


In March of 2010, I announced the end of Column of the Americas; that would have marked the end of 16 years of writing a deadline-based nationally syndicated column, first with Chronicle Features in 1994, then Universal Press Syndicate, and finally, independently with several national publications and syndications, including New America Media.

And then came Arizona’s notorious racial profiling SB 1070… then the anti-ethnic studies HB 2281. (In Arizona, we don’t refer to them as laws. At best, they are anti-laws). Of course, more are on their way – nullification of birthright citizenship – and they are being expor

ted and as welcomed as a cold arctic blast from hell.

Well, I didn’t change my mind about Column of the Americas. But I was supposed to write less, not more. Someone forgot to tell Russell Pearce (president of the state senate), Joe “pink underwear” Arpaio, Jan (Gov.) Brewer, Tom Horne (state schools superintendent and soon to be attorney general), and now, John Huppenthal (Horne’s successor). Honestly, can someone who knows these cats write to them and tell them that they need to move on to other issues so I can retire from column writing? I need to move on.

Seriously, Arizona legislators need to move on. In an irony of history, they are proof that: In Arizona, Darwin was wrong. Apparently, somebody (a legislator, no doubt) has nullified evolution in Arizona. I think they’ve also nullified intelligence and thinking. Elected officials here also disprove another famous adage that: the march of history is always forward.

But back to my story… or would you rather that I continue digressing about the regressive, repressive and reactionary insane asylum we call Arizona? … OK, but when do I get to finish my____ story?!@#!!!

Truth is, there is no mystery about Arizona. It’s a ruse. Even a subterfuge. While we fight what appear to be illiterate political troglodytes on the issue of the browning of this nation, this nation continues to devolve into the United States of War. The Tea Party rails against deficit spending but is all thumbs up on permanent war – which not only permits the U.S. military to take lives without the benefit of trials by the thousands anywhere in the world, but it is also the chief cause of our deficit. The Republican Party (Tea Partiers in suits) demands that we cut spending on everything, except for all things military and law enforcement… in other words, to hell with human needs and the needs of the planet and let our permanent wars continue unabated (Hey this a digression upon another digression).

The point is, this war against brown people in Arizona and in this country is actually related to this notion of permanent worldwide war. But we’re not supposed to look at the big picture. We’re only supposed to be able to point out the narrow-mindedness of Arizona legislators and their effort to nullify the 20th century, etc, etc. The idea that more than two dozen states are set to follow Arizona’s lead regarding dealing with “illegal alien invaders” (This new dehumanizing term comes compliments of Daryl Metcalfe, a Republican Pennsylvania state rep.) is actually a mis-analysis. Arizona is not the leader in these politics nor does it constitute an aberration; it actually typifies the history of this country and continent. If you are not certain about this, please read Decade of Betrayal (Rodriguez and Balderrama), Brown Tide Rising (Santa Ana) and Open Veins of Latin America (Galeano).

And yet, while Arizona cannot be ignored, it should be contextualized in relationship between resistance and creation, here in the desert. What is developing in Arizona is a resistance/creation culture. It is awesome and I happen to have front row seats. Resistance by any other name is still reaction. Creation is what is developing, when people act from an axis mundi that does not point to hate, fear or ignorance as its center. The resistance/creation culture that is developing in Arizona is youth-led, the result of having to battle over their/our very humanity and our very existence, but also as a result of an understanding that their/our knowledge and essence is not dependent upon what Western or modern culture permits or outlaws.

In the recent December conference we held at the University of Arizona that examined hate, censorship and forbidden curriculums, many of us witnessed pre-K-12 students and college and university students stand up and speak for themselves. Amidst massive dehumanizing assaults on who they are, they are courageous, determined and resilient. They are clear-headed and tienen Coraje! They are awesome and the continual battles here are producing them on a daily basis.

And thus, it’s time for us to listen to their stories, their experiences, their organizing efforts and their visions. And many indeed are great writers and great story-tellers. Its time to give them the mic.

Now I’ll finish my story: Under intense pressure, I’ve been instructed to publish academically or else? So I have a book I just finished and another one on the way… plus I will be writing a few journal articles (about 11 people will read them) about this dehumanizing experience we’ve all been living here in Arizona. So I’ll reiterate, I won’t stop writing the column, it just won’t be deadline-based nor on a regular schedule. It will be written when the need arises (again, someone call Pearce, Horne and company to slow down). But I will also do my best to continue to keep you posted on the continuing war here in Arizona. Question is, can I still run?

Rodriguez, a professor at the University of Arizona, can be reached at: XColumn@email.com and http://drcintli.blogspot.com/. Older columns are archived at: http://web.me.com/columnoftheamericas