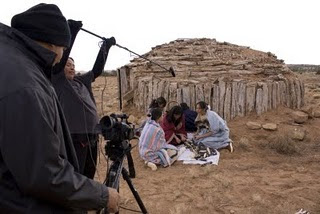 Red Nation Film Festival is the largest and most prestigious celebration

positioned itself worldwide as the best venue for marketing American

For The Next 7 Generation /The 13 Grandmothers

In The Footsteps of Yellow Woman

A NIGHT OF TRIBUTE AWARDS CEREMONY recipients were:

In attendance were: Edward James Olmos (actor), Josie Thomas-Head of

Manybeads Tso (director/In The Footsteps of Yellow Woman) to name a few.

Association for the Advancement of Colored People (NAACP) gave opening

Environmentalist-founder of "Help the Earth”

closing night Red is Green Carpet Galas and were performed by:

PAST RNFF Honorees have included:

Garcia of National Congress of American Indian, Alvin Warren-Secretary of

accomplishments of Independent Motion Pictures and Documentaries, which

include individuals who have made advancements in film, radio, television,

in the arts, volunteerism, and cultural affairs including Red Nation